I had a similar demonstration of this theory today. The GFCI/ELCB socket in my downstairs toilet let it's smoke out today. Good job we caught it too otherwise we may not have had a home to live in. 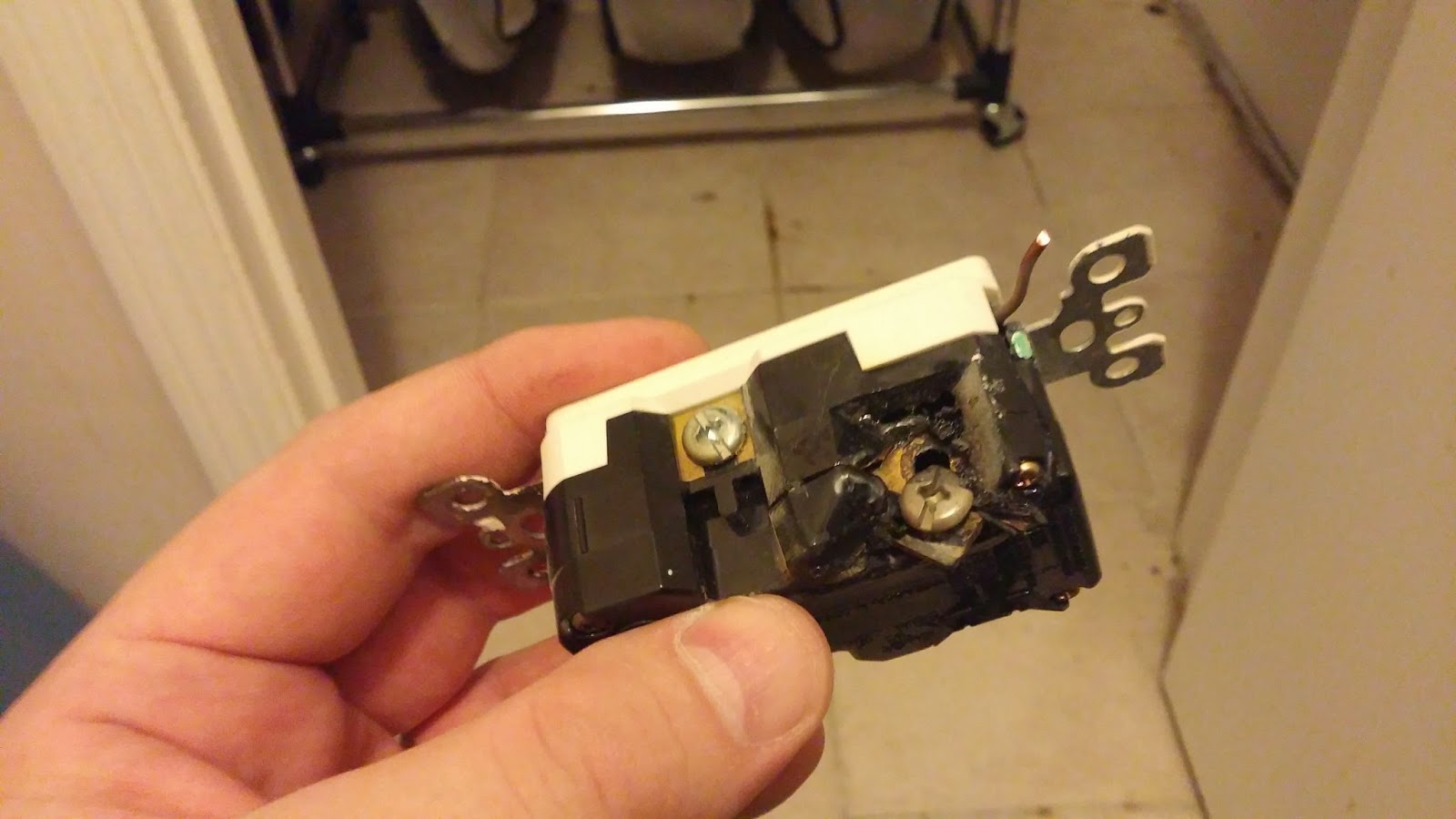 Turns out that there was a loose connection in the return wire. Every time my wife ran her hair dryer it would cause the wires to move under the stress of the current load. The return (a white wire here in the US) would then disconnect itself then reconnect itself causing lots of sparks and arcing and burning. The result was that both the wires and the socket would get hot and so release their smoke. 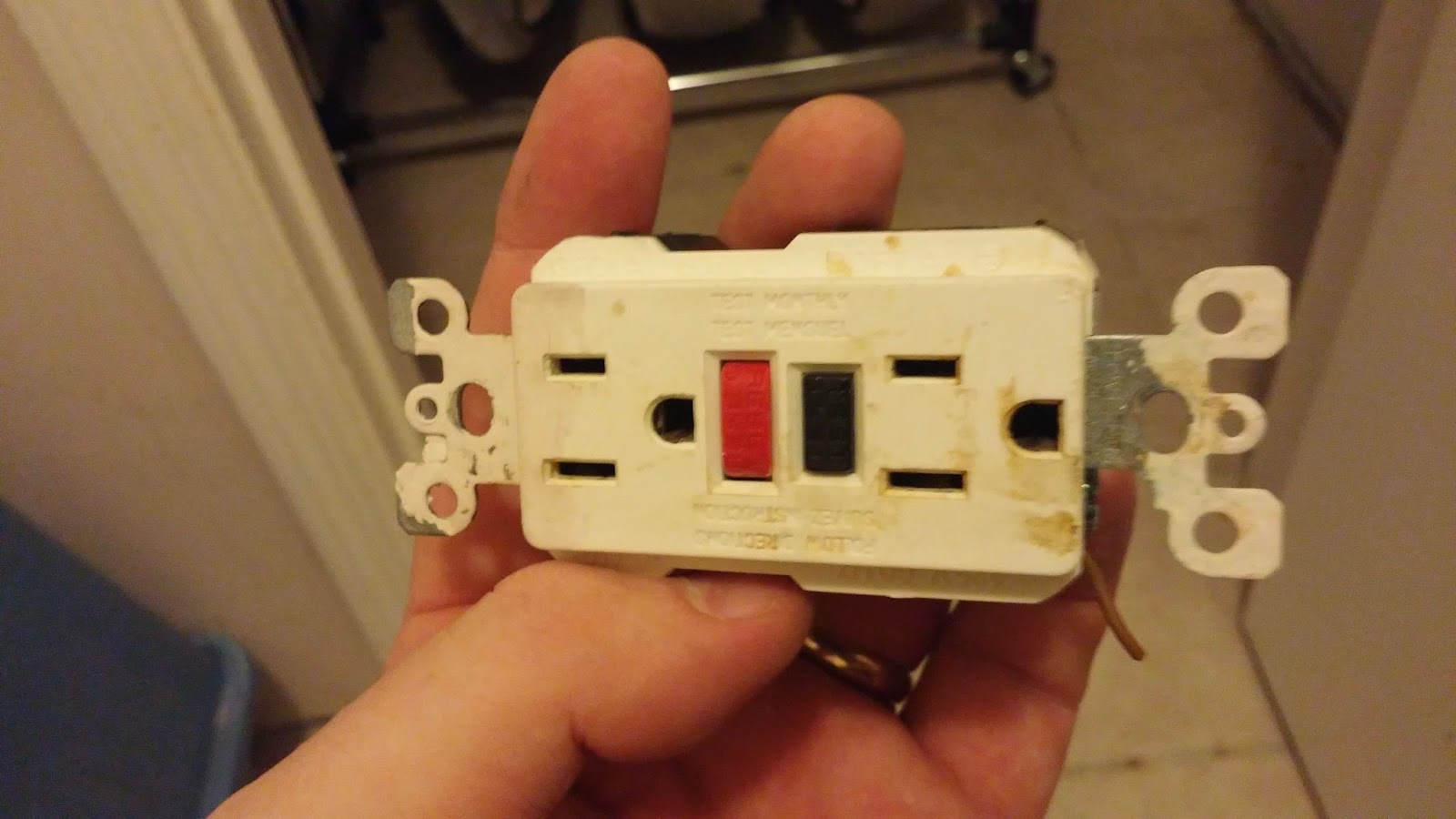 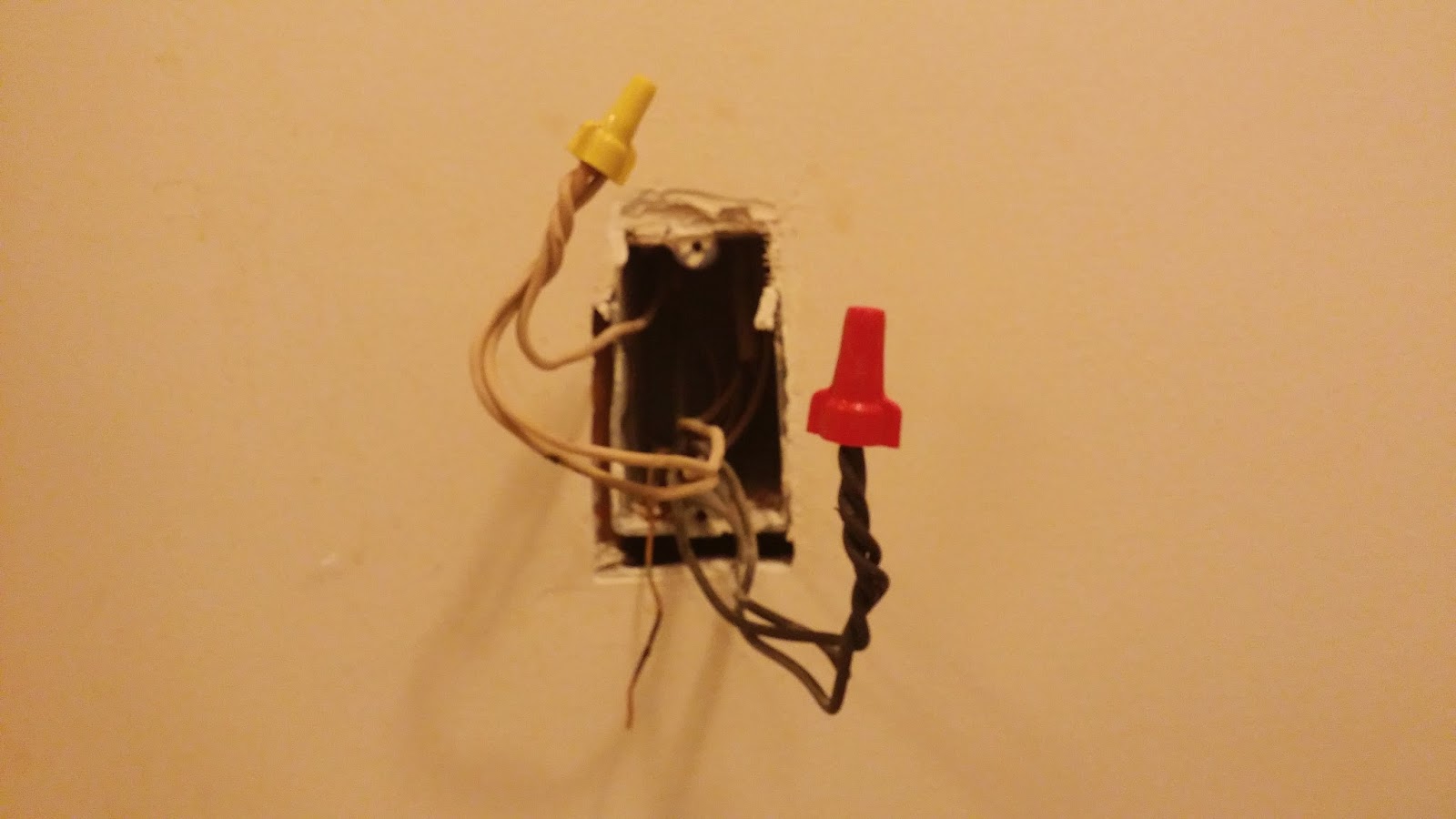 Good job we caught it. Or rather my dog Rascal caught it. He heard the GFCI arcing then ran into the toilet and started scratching at the wall. It was only when he started barking drawing me into the room that I saw the problem. GOOD DOG!!!!! Extra belly rubs for you. 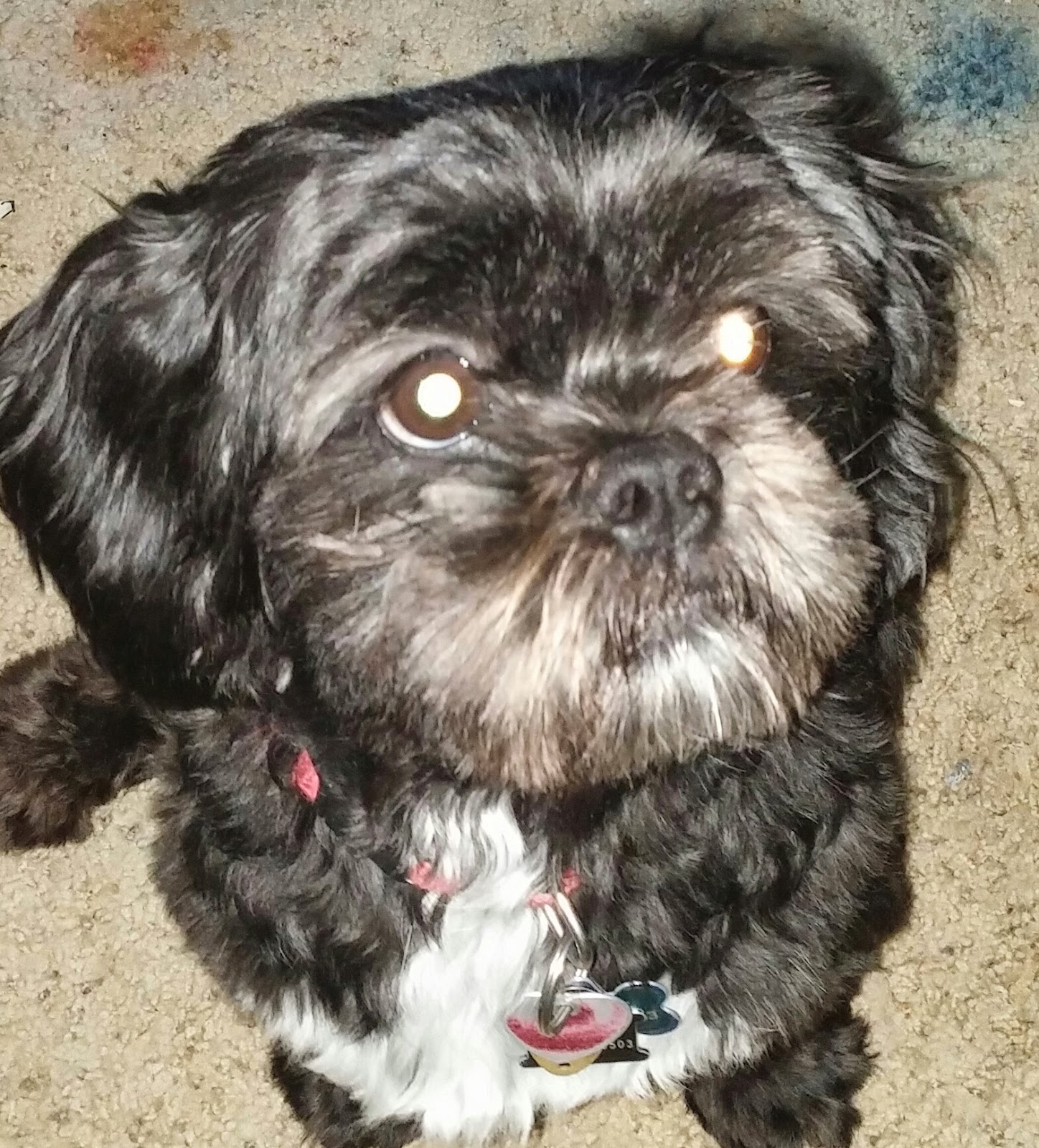 Yeah, yeah, yeah. We've all seen Go Kits before. But as Go Kits go I think mine is "up there".

I am a fan of the Pelican case. Y'know the ones? Hard plastic water tight cases that can float and take a beating when traveling. They are usually filled with foam and have cutouts for the equipment they hold. I bought an IM2200 from my local Best Buy electronics store for $100. This seems to be an average price for them. Ebay did not reveal a cheaper price. It comes filled with 2 layers of "pick-n-pluck" foam which allows you to create shapes by pulling squares of foam out. 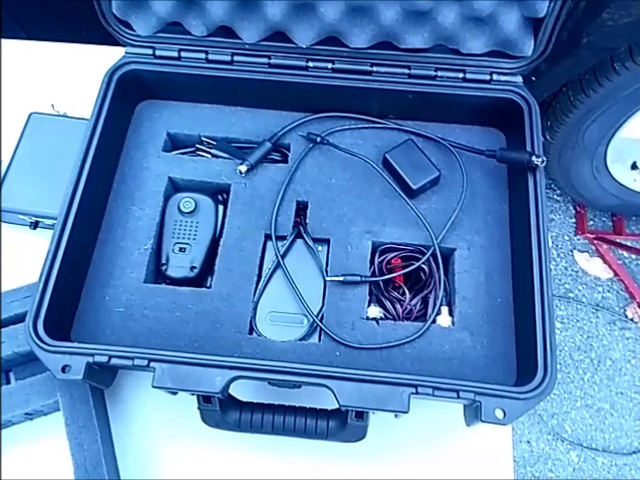 In the above picture we can see the lower foam layer. I've created cutouts for the mic, mains PSU, PSU cable and antenna tuner cables. The small box in the top right corner is a Wolphi-Link interface. It's like a PSK31 sound card interface but for your cellphone/tablet. It will also get a cutout. 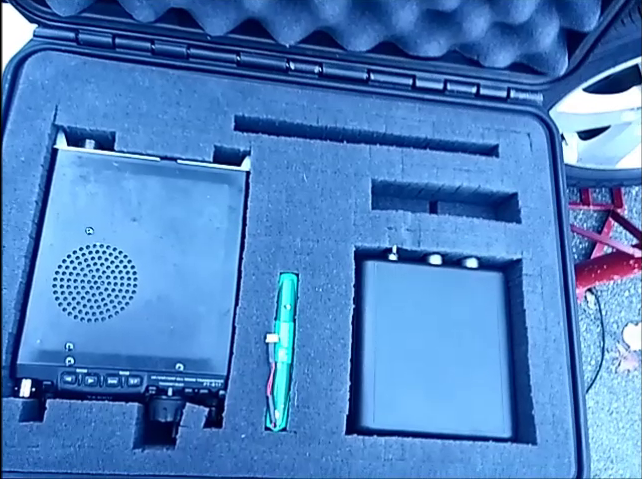 In this picture we can see the upper layer of foam which holds the FT-817, LDG tuner, spare battery, whip antenna and 1:1 balun. The egg box type foam in the lid also pulls out. I can get 25 feet of RG58 and a 50 foot dipole behind it and still be able to close the lid with ease.

Here's a video of me packing it all away into the case https://www.youtube.com/watch?v=NzgnMb5nZo8
Posted by Mark/NI2O at 15:14 No comments:

I have a 2013 Dodge Journey. It's equipped with all bands from DC to light. It has FM, D-STAR, APRS and HF as well as a few non ham facilities. The problem with the car is that the steel its made from is very thin. The roof for example, flexes with the stress of a VHF antenna. So you can imagine what happens with a tall HF antenna?

A common HF antenna mounting solution is to install a clamp style bracket onto the rear liftgate high up as near to the roof line as possible. This is not possible with my car as the rear liftgate is made of plastic. Plastic and antennas don't work together. One needs a rather large amount of metal underneath the HF antenna so as to act as the counterpoise.

Over the 18 months or so that I've had my vehicle I've tried various mounting methods the best of which was a rather large magnet affair that consumed quite a bit of the roof space. This in turn prevented me from using the roof for other purposes.

My friend Kathy, KT2F, has an expression; "Be a man! I'm a man". She is referring to her willingness to drill holes in her new car to mount antennas. She's not wrong. According to my friend Norman, G4WQS, "a good mechanical join makes a good electrical join". Drilling a hole into the metalwork of the car would create both strong mechanical and electrical connections but only where the metal is thick enough.

I needed to replace the brake light on the back of my car today. Removing the light cluster is a simple matter of removing 2 plastic buttons. That's when I saw it. I finally found a spot to mount the antenna. It's not the best place on the car but it has all the other boxes checked. You can clearly see the grommet where the cable exits the car behind the light cluster. By dumb luck I had a bracket in the junque box that would fit between the light and the car. 4 holes and some rivets later the mount was installed and a SO239 type antenna connector was attached to the mount. The coax feeding the antenna will feed through the grommet into the car and then on to the back of the radio. 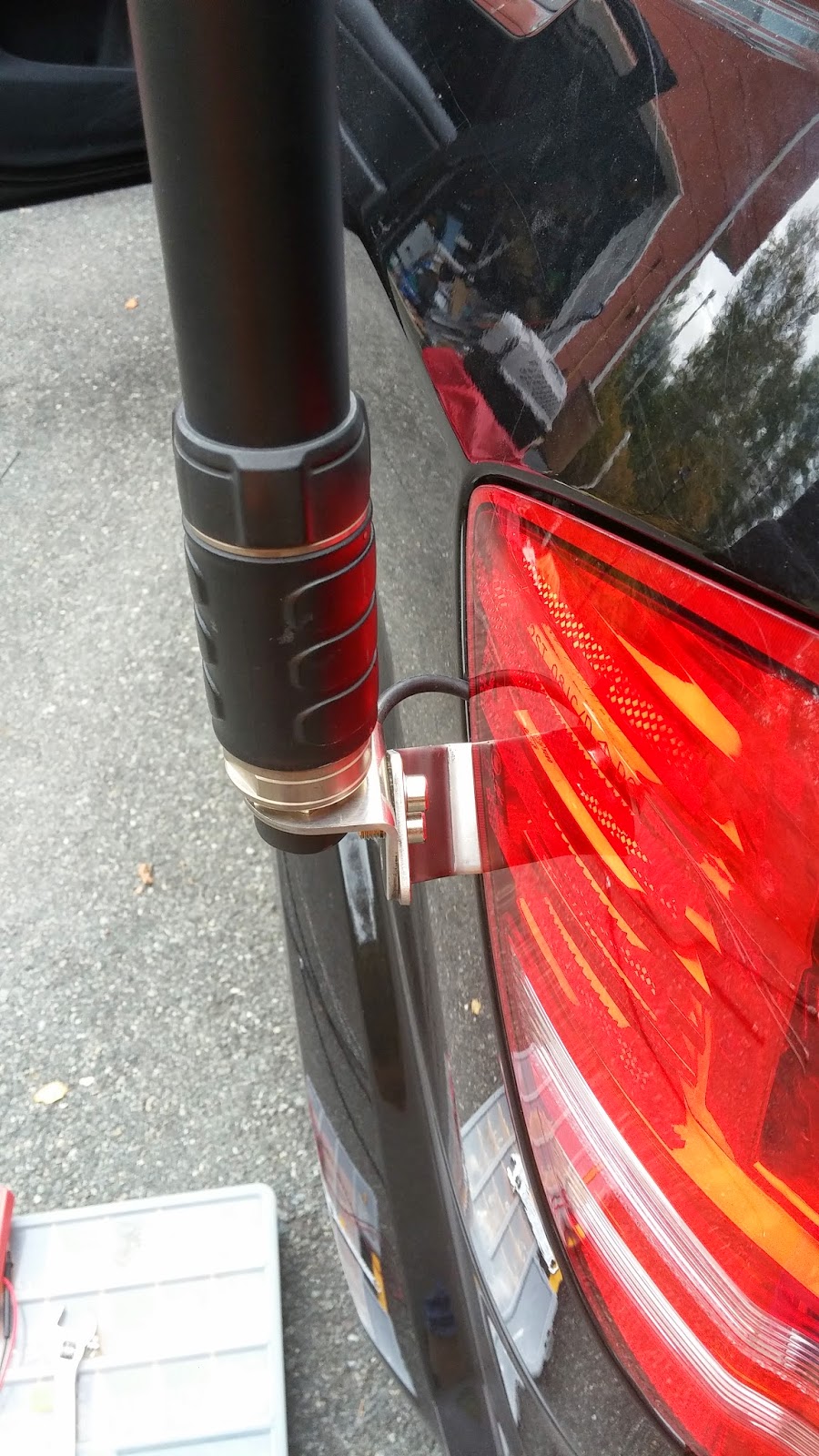 As you can see from the completed installation, it is quite tidy. Click the pictures to get a closer look. 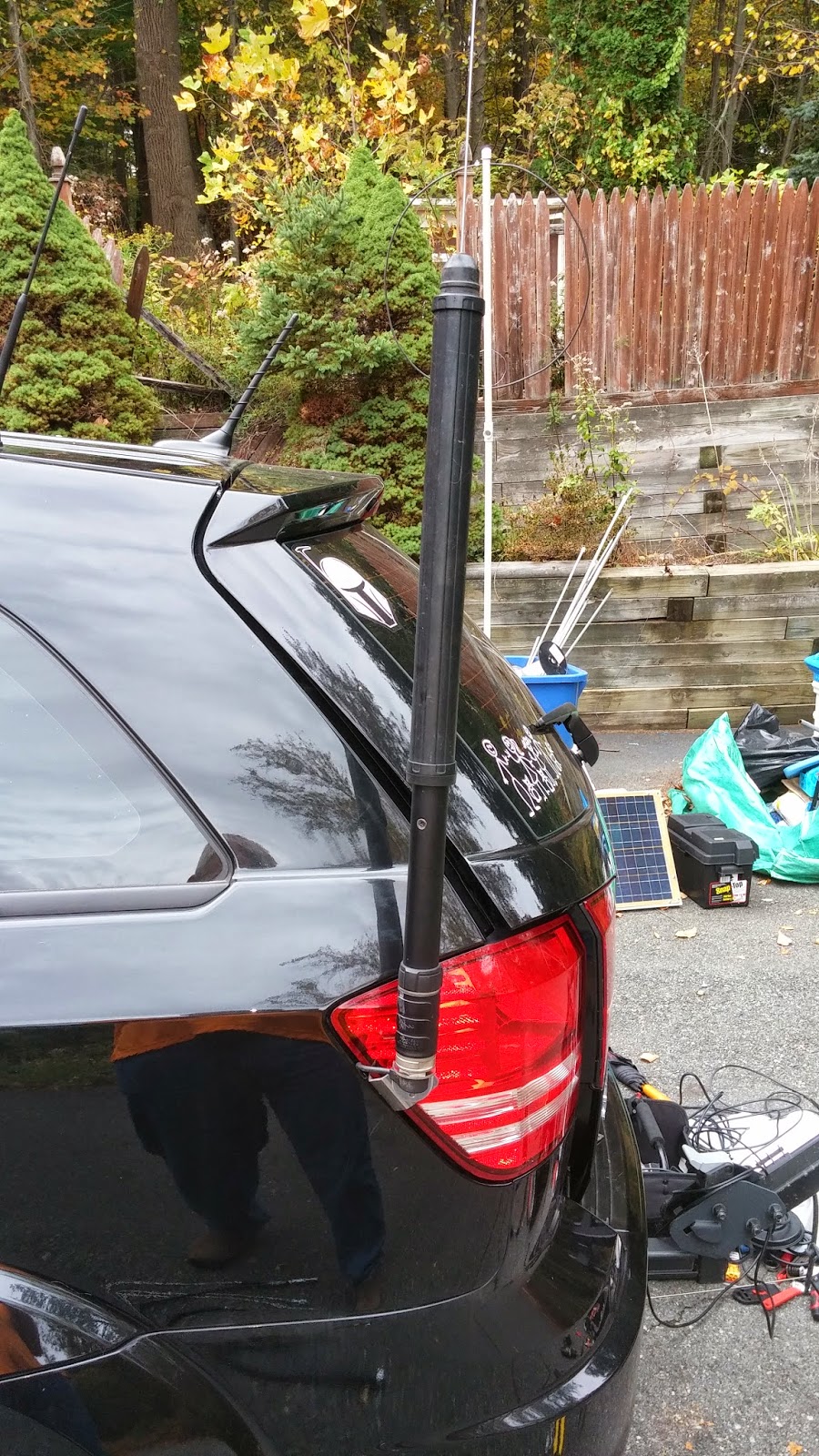 The total job took a little over an hour and that included fishing the coax cable from behind the interior paneling in the back of the car. Tests while parked on the drive show a much improved tune time (I have a screwdriver type antenna) and a broader bandwidth. Indeed, I no longer have to keep retuning when on 40 meters (the lowest band the antenna will cover) whenever I go from one end of the band to the other. Band-to-band tuning is also faster. I can now jump from 40 meters to 10 meters without the auto tuning circuit in the radio timing out.