My girlfriend has a Chevy Sonic. She also has a newly minted ham licence. And as if all that wasn't enough it was recently her birthday. She has a Yaesu FTM-100D. The job of installing it fell to me.

In a previous posting I installed the antennas onto her car.

On this outing we'll be installing the radio itself. The main body of the radio will reside in the cargo shelf at the back of the car whilst the control head, mic and speaker will be mounted in the front.

Let's get some power to the back of the car. Get yourself 15 feet of #12 or #10 black and red wire. Cut a hole in the large grommet in the firewall and pass the wire through it. It's easy to find right behind the battery. You can reach it from under the dashboard too.

Do not connect the wires to the battery just yet. 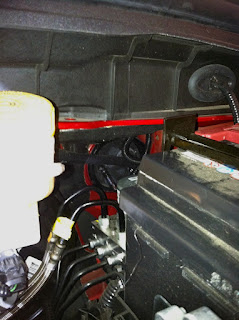 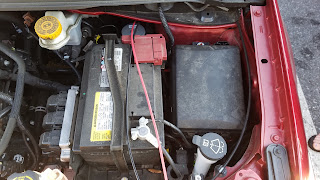 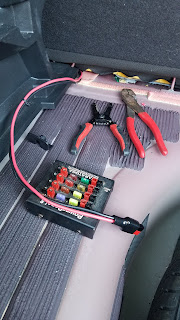 You may now replace the flooring in the trunk. I terminated the trunk end of the wire with 45Amp Anderson PowerPoles. In turn the cable will feed a fuse box for other equipment. Return to the engine bay and install a 30Amp fuse on BOTH the red and black wires then attach them to the battery. Test the wiring (you should have 12V at the trunk end of the cable). If all is well install the radio into the trunk. 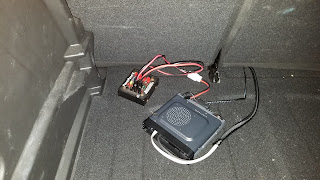 Using the supplied remote head mounting kit, connect one end of the long black telephone style cable to the radio body and feed the other end under the rear seat, across the trans tunnel and into the drivers zone. Do the same with a remote speaker. The microphone will require you to obtain a 6P6C telephone cable. Make sure that it is wired 1-1 rather than 1-6 (reversed). I ended up buying a 25' cable from eBay and then cutting it to length before installing a new plug on the end. As you can see in the above picture, I fed all my control wires through a piece of cable dressing so as to keep them all together. 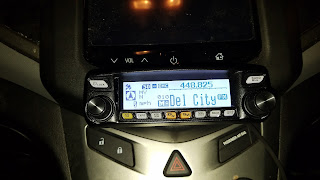 Finally, using an RJ45 cable coupler, connect the mic to the mic cable. Also connect the head to the black control cable and position all items in your favoured position. I used 3M double sided tape to secure the head to a spot just below the radio control screen.

Don't forget to put your car back together again.

Never had one of these when I was in Dublin

I went out with a friend a few weeks back to an "Irish Pub". Staten Island is covered in "Irish Pub" establishments. The nearest any of them have been to Ireland is, well, they haven't.

It was with great humor that I read the menu of the place we went to. They offered a Dublin Works Burger". It's ingredients were listed below the title and are anything but Irish. 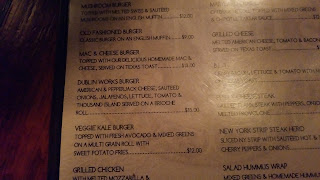 American and Pepper Jack cheese, Jalapenos, Thousand Island dressing along with the usual veggies all served on a Brioche bun. A classic Dublin Burger if ever there was one.
Posted by Mark/NI2O at 20:48 1 comment:

I installed 3 antennas onto a 2015 Chevrolet Sonic this weekend. It was a simple install that will in turn be attached to some ham radio gear that is yet to be installed into that vehicle.

After discussion with the owner it was decided to install the main antenna supporting the voice radio into the middle of the roof. This will allow the optimal radiation pattern for the antenna. However, this would require removing the head liner from the vehicle to allow access to the center of the roof. A compromise was found by installing the antenna directly above the rear passenger dome light which was only slightly off-center to the vehicle. 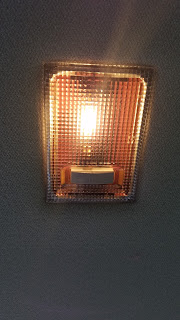 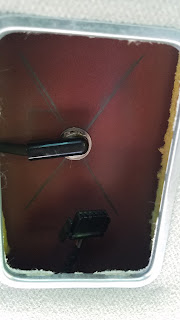 The Dome light is easily removed by gently pulling on it. It will fall out and be held by it's supply cable. Remove the supply cable by pressing the clips found on either side of the connector. Remove the light and put it in a safe place for later restoration.

Now drill out the hole you've made with increasingly larger drill bits until you have a hole that will correctly accept your antenna mount. My NMO mount required a 3/8ths hole but others require 1/2 inch or even 3/4 inch holes. Increasing the size of the hole in steps makes for a neater hole and reduces the risk of buckling the metal with the torque of the drill.

Clean up any shards and splinters with a slightly larger drill bit but be careful not to create a larger hole. Install the antenna mount into the hole you've made making sure to weather seal it where necessary. 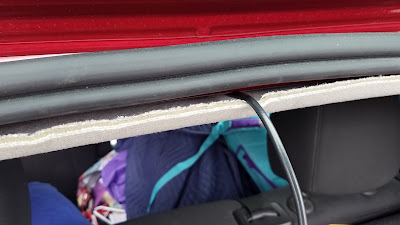 Depending upon the style of the mount used you may have to insulate the bottom parts of the mount so as to prevent them shorting on the light. A strip of duct tape would be ideal for this. As you can see, my mount had a plastic cover already. Reconnect the dome light and reinstall it back into its hole. We are finished with this part of the installation. 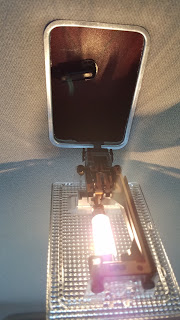 I did say that I installed 3 antennas. For the remaining 2 I used a combined GPS antenna with NMO mount. This was installed at the back drivers side of the roof. I didn't get any pictures of the install as it started to rain just as I had drilled my pilot hole. But, here's the finished product ... 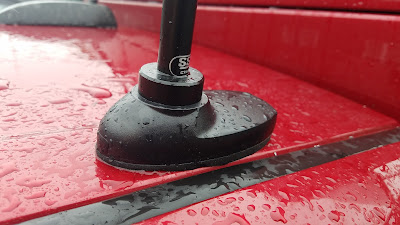 The flat part at the rear of the mount is the GPS antenna whilst the front part is an NMO mount. As you can see, the rain made taking pictures of the install impossible. 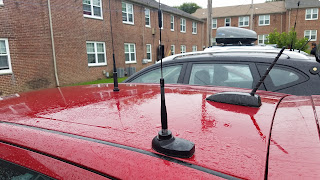 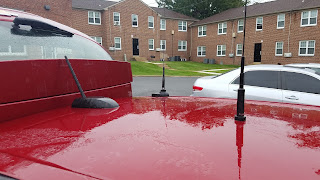 It's October already! Where has the summer gone?

If you've been around ham radio for a while you will have heard of the Jamboree On The Air (JOTA). It happens on the 3rd full weekend in October and is an opportunity for Scouts all over the world to get on the radio and chat with each other via ham radio.

I've taken part in every JOTA event going back to 1988 and can honestly say that I've enjoyed every one of them. I was even involved in the startup of Jamboree On The Internet (JOTI) which is held concurrently over the same weekend.

If you've got a few spare minutes over the JOTA weekend please keep an ear out for the Scouts and drop in for a chat. It's an excellent opportunity for them to earn a few merit badges, discover ham radio and learn about peoples from all over the world. 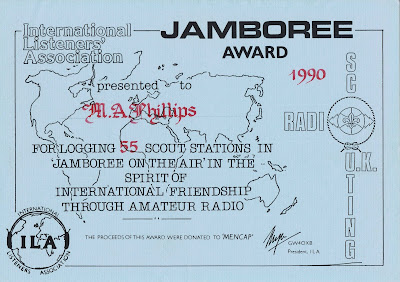 I got this certificate from the now defunct International Listeners Association (hi, Trevor!!). Back in those days the UK Scouts had to receive 50 radio stations as part of their Communicator merit badge. Of course, they all complained that it was too hard so I sat down with them before breakfast on the Sunday morning and managed to log my required 50 in the time it took to get breakfast cooked (we were camping at the Scout hut).

I was on the radio a few days ago talking with the guys about radio awards. They were all bragging about their Worked All States and DXCC etc. When asked what "wallpaper" I had I was only able to reply that it took me almost 20 years to earn Worked All Continents. However, I do have a very exclusive award; the Worked All 31 Pierson Road Award. To my knowledge there are only 8 in existance. 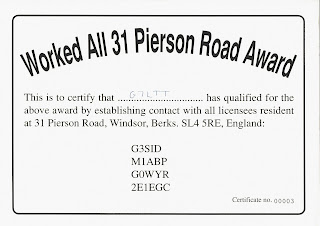