If you've been keeping up with my blog you'll know I have one of these radio's. So far it's been a great radio for the money (I got it on sale at HRO for less than $300). I need it to transmit on some none Ham frequencies and so need to modify it so that it will transmit out of the Ham bands. This modification is commonly knows as the "MARS/CAP mod".

There's nothing new under the sun and certainly not on the Internet so that's where I went looking first. A Google search led me this document which outlines the modifications for both the FTM-400 and FTM-100 radio's. It's wrong!!!!

Or rather, it's not quite correct. Whilst the document correctly outlines the modification procedure for the FTM-400 it only outlines the procedure for the European version of the FTM-100DR. It's all about removing the resistors y'see. Using the pictures in the above document I noticed that the EU resistor was already removed in my radio. Erm ..... WTF? So it does appear that the modifications for the 400 are the same as for the 100. 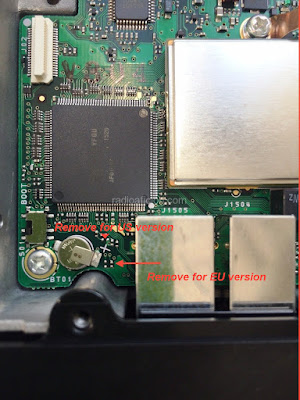 Take the top cover off your radio and orient it with the mic socket facing you. In the bottom left will be a white sticker with a slot in it for the firmware upgrades. Carefully remove the sticker to reveal the backup battery and a screw as above.

If you have an EU version the resistor that would be removed for the US version is already missing. The same is true in reverse for the US version. In short, you will remove the relevant resistor so that in the end you will have no resistors in either the EU or US position. My US version already had the EU resistor removed so all I had to do was remove the US resistor.

Click on the above picture for a better look at what to remove. The usual caveats apply; I won't be held responsible for your bad soldering work. If your car explodes when you key up on your local CAP repeater that's your lookout.

The radio will reset itself when you first power it on. You'll need to make sure that either you back it up before carrying out the mod or somehow reprogram the radio when you turn it back on again. This part is still causing me issues but that's another story.

Reprogramming the newly modified radio is a bit of a nightmare. All of your saved memory files will no longer work. I tried to restore the radio memories etc from the backup I had made to its SD card but the radio displayed an error whenever I did it.

I then returned the SD card to the laptop and read card in again. Now that I had an active file I "Inport" (there's lots of spelling mistakes in the Yaesu software) the CSV file and then send all the data back to the SD card. Finally I moved the SD card back to the radio and read in the memory information. The radio rebooted when it was done reading the file and there were all my memory channels restored.

Why didn't I use the programming cable? This is gonna sound silly but you need 2 people to do this when you remote mount the radio. I couldn't set the radio to clone mode and then run to the trunk to press the buttons on the laptop before the radio timed out. I'm sure this would have been a less painful way to reprogram the radio. Maybe next time I'll enlist some help?
Posted by Mark/NI2O at 17:47 20 comments:

Amateur Astronomer of the Year 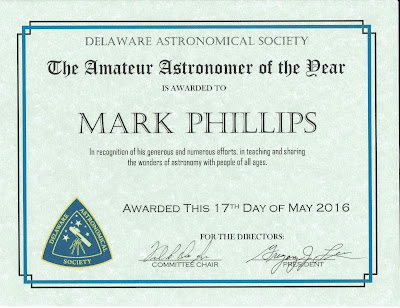 This was an unexpected surprise. Was at the Society's dinner last night and walked away with this.
Posted by Mark/NI2O at 09:52 No comments: