I'm working with a small group of other hams trying to get some Packet Radio links operational again. You would think that after 30 years of this mode there would be an easy, turn key method with which to get it all going. Think again.

One of Packet's problems is that it was more-or-less abandoned in the mid 90's when the World Wide Web came along. So the only stuff that one can get for this mode is of that vintage.

APRS on the other hand uses Packet Radio and is very successful. But still there are few to none turn key kits available for this variation of Packet.

It would seem that I'm not the only one thinking that this should be easier. I went looking for a TNC (Terminal Node Controller) that I could attach to the USB port of my computer. This was a mammoth task in itself. With newer machines leaving "legacy" connections behind, Ethernet and USB are the order of the day now. No more serial ports.

Then I happened upon SP9UOB's dsTNC. It is a dsPIC (a PIC that does DSP). It has all the makings of a low cost, easily constructed TNC. It can do 1200bd (the current data speed) and has aspirations on 9600bd with a firmware change.


Looks simple right? Problem is that it has a "proper" serial port. No USB.  That I can fix. I've been doing lots of stuff with the FT232 USB-Serial converter chip lately so I added on to this design.

So I then designed a circuit board. 2 in fact. One using "normal" sized components and the other using SMD parts. There were a few things wrong with it but nothing that a few "green wire links" couldn't fix.


Then came time to plug it in. The firmware has a terminal interface to aid in setting up things like your call sign and the PTT delay etc. It also has a KISS mode. I connected it to a radio and tuned to the local APRS channel. Lots of lovely APRS positions came spooling in to my computer. It works!!

It does NOT work! Well, that's not quite true. It does support KISS and works just fine if all you want is an APRS modem. But a TNC is more than a modem. It has a CPU, RAM,Modems etc. What I found was that if the passing data packets were of a certain length they would be decoded. If they were shorter or longer they would not be decoded. This is flat no use with normal Packet operations.

After much gnashing of teeth and questioning of known working equipment I tracked down the problem. The firmware was not correct. The "TNC" part was not there.

I advised SP9UOB of my findings and he in turn sent me a patched version of his firmware. Indeed this worked - sort of. I could now decode passing data of any size but if the data was too long it would arrive garbled or even be missed altogether. SP9UOB has not selected the correct micro processor part and so it did not have enough RAM to store/decode the passing data. So it still doesn't work as I'd hoped it would.

Back to the drawing board!

Back in the late 90's I realised a long term goal. I bought and built a weather satellite receiver. The kit was developed by a group called RIG (Remote Imaging Group) and sold for around £100. A good few thousand of these kits were sold worldwide. I even bought more of them to give away to local schools.

Its now 2014 and this kit has run its course but look closely on Ebay and you'll see that they are still available. RIG has been selling them for a closeout price of £50 plus shipping. As I had given away my last one to UACNJ I grabbed me another kit.


I also made a few modifications. The kit would normally have a single 7 segment LED to indicate what channel it was tuned to. You could also add a signal strength meter to give you some idea as to how well you were hearing the satellite. I decided that I wanted a LCD rather than an LED. It would make the project look a little more modern. To that end I designed a LCD interface around an Arduino. I drew heavily from the work of Grant Zehr, WA9TFB. Grant had earlier designed a similar LCD display based on a PIC16F84 but it was limited to displaying only a few channels because the chosen PIC was lacking input and so could not read the entire state of the LED. The Arduino doesn't have that problem.


In addition to the LCD expansion board I created a breakout board to better handle the large wiring loom that connects all the controls to the actual receiver. This board also manages the master power switch as well as supplying power to the LCD board.


To my surprise it all works! I've not finished putting holes in the enclosure yet but the receiver and display work very well. I have populated the channel table in the Arduino with some information about the satellite that is on a given channel so that one can see more than just "4" or "9". The Smeter is also displayed as a bar graph on the lower left of the display when receiving a satellite.

The next step is to connect it up to a spare PC so that I can display the actual pictures the receiver gets. I'll make these available on my website too.

A new clock for the shack

"A man with a clock knows what time it is. A man with 2 clocks is never sure."

It speaks to having too much information when making a decision.

I have that problem. I have a thing for building electronic clocks. Nixie's, LED, LCD, Binary, VFD. I have them all. I have never built one of my own design however. They have always been found on the Internet and built from a diagram or around a PIC etc.

This clock is different. I can honestly say that I designed it from scratch. I wanted an NTP based clock so that it would always be correct without me having to set it every time the power went out. I also wanted to learn how to use an Arduino. This clock was born out of a combination of those two needs.

In addition to displaying the current UTC time the clock also displays the current cycle of the HF Beacon Project. 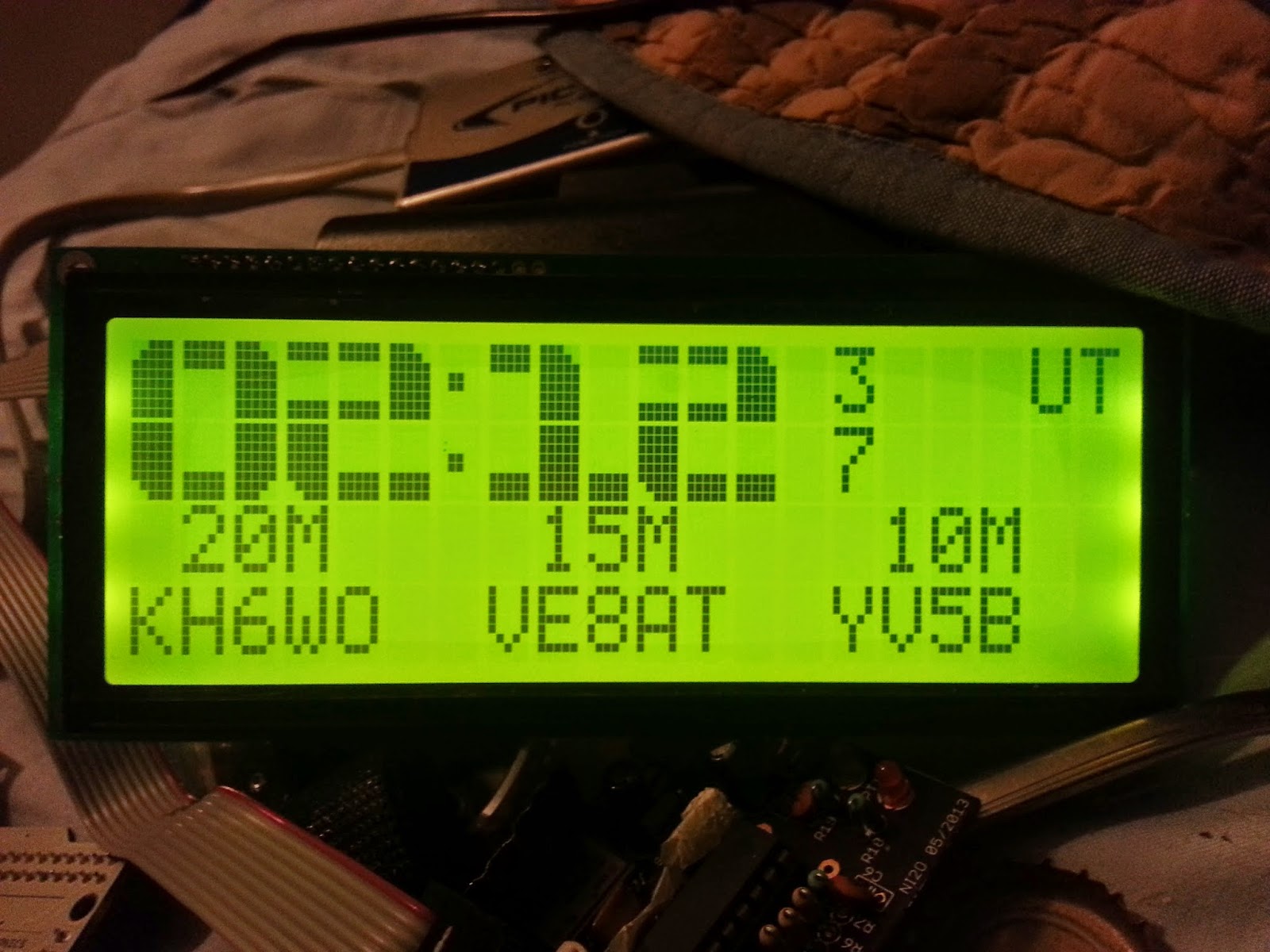 I'm a member of UACNJ, an astronomy club in Hope, NJ. We are open to the public every Saturday night from April until the end of October. It was one such night last year when I took the below picture. I was standing with my back to the 'scope when I heard a child screaming. I turned around and saw this Praying Mantis on the finderscope. He was very obliging and waited for me to find my cell phone so that I could take his picture. 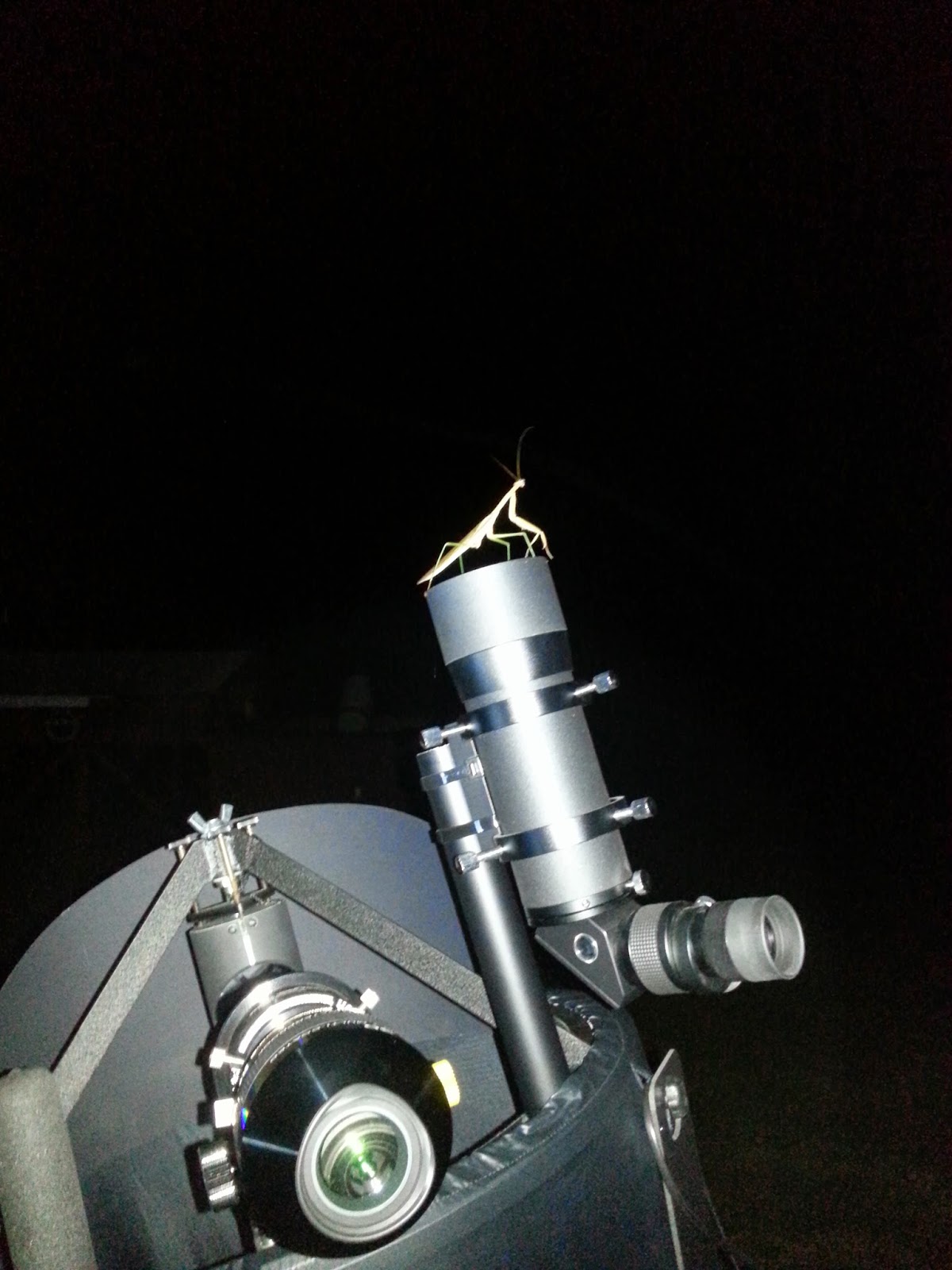 Who put the cat in the wash?

Our other cat Snowball, likes to hang out in odd places. I went to load up the washing machine the other day only to discover he was already in there. I wonder if I need to put him on a "whites wash"?

It is with regret that I report the passing of Snowball. Unfortunately Snowball perished in the washing machine he loved so much. A load of laundry was done and he was not noticed in the machine. His remains were discovered by my daughter some hours later.  Snowball now rests in the garden where he can dream of chasing chipmonks all day.
Posted by Mark/NI2O at 23:08 No comments:

Cats in my pants

We have 2 cats. They belong to my wife and daughter. But yet some how they always want to be with me. They follow me everywhere. Including the bathroom. Can't a bloke take a crap in peace?

After an almost 4 year hiatus my Davis Vantage Vue weather station is back online. Point your browser to http://www.g7ltt.com/weather for a closer look.
Posted by Mark/NI2O at 22:38 1 comment:

The very first blog posting ever. Well, for me anyways.

Many of you have noted that there has not been much activity in my web space of late but yet there are all sorts of activities going on in my shack. Truth is I cannot be bothered with all the faffing about that used to be writing web pages. All that code and links etc just get tiresome in the end.

So, I'm going to have a go at this thing. Don't expect daily updates or anything. This will simply be a place to do a brain dump. It'll make sense or it won't.

Thanks for sticking with me and stay tuned!