Having wrestled with my new car to install my ham radio gear into it I discovered this problem. I bought a Yaesu FTM-100DR Digital Fusion radio for my car. Let's not bother with with what it does or how D-STAR or DMR may or may not be better than Fusion.

It has a built in GPS receiver. It uses the information from this receiver to tag the digital voice packets with my current position. Except that it doesn't. Or rather it doesn't do it correctly. It does tag my outing data with an GPS position; just not my actual position. Take a look at the below picture. 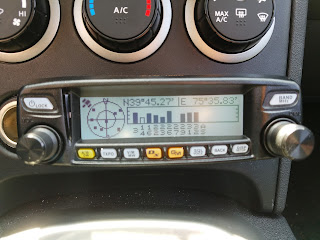 Where is the radio? According to Google and other mapping sites my car is in the middle of nowhere on the side of a mountain in Western China not too far from the borders with Pakistan in the South and Tajikistan in the West.

Yes, the software that's interpreting the GPS data is clearly having an issue. I can indeed confirm that this picture was taken in Wilmington, Delaware. Examination of the GPS metadata in the picture will confirm this.

I've not been able to confirm what this .... erm .... "undocumented feature" .... has affected within the data stream itself. Is it merely a cosmetic GUI issue? Am I actually telling the world that I'm in China? Am I sending any position data at all? An examination of my station details as forwarded to the greater Yaesu Fusion network would reveal the answers. However, none of my local Fusion repeaters are connected to the Internet.

One of the features of this radio is that it has APRS abilities. It can transmit my location to the APRS network via it's built in GPS, AX.25 modem and of course, the radio. So that's what I did next. With help from Charlie, N2NOV I configured the radio as an APRS tracker with the callsign NI2O-2. I then went for a long drive. You can see my journey here.

As you can see, I took a drive East along I80, Rt46 and Rt3. Then South East along the NJ Turnpike to Delaware. Charlie would check my progress every now and then to see how I was making out. In parallel to the Yaesu I was also running my $100 APRS Tracker Mk2 and also APRSDroid, an APRS app on my cellphone.

The fact that you can follow me in the USA rather than Western China tells me that the GPS issue is a cosmetic one. It would seem that the positioning data tagged to the APRS is correct. I have discovered 3 firmware updates for this radio so I expect that this issue has been addressed but unfortunately none of the firmware update files comes with a "fix list" so it is unknown as to what issues have been addressed.

So far it seems to be working very well. If only I could use CHiRP to program it I'd be a happy boy.
Posted by Mark/NI2O at 09:45 2 comments:

I bought a new car recently. It's taken me over a month to work out how to install my ham radio gear into it. Finally I discovered a few websites and chat forums where guys were installing high end stereo equipment into their vehicles. I got much advice from them. The below details my adventures.

All my radio's can be remote mounted. This means that the actual radio can be separated from the control head by means of a control cable. I've taken to installing my radio's in the back of the car with the control heads on the dashboard.

Far at the back of the car in the trunk area is an access panel that leads to the spare wheel. There's also a tray that runs the width of the car. It's just deep enough to place all my radio gear into. 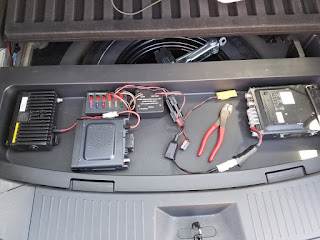 So now that the radio's are secured how do they get connected to the control heads in the front of the vehicle? That had me stumped for a while. Then I noticed these wires arriving from the back seat side of the car. Look closely and you'll see them either side of the hinge straps that hold the trunk floor in place. Where do they come from? 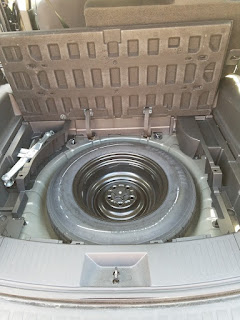 I was able to remove the seat cushion from the back seat. It's held on by just 2 clips. Can you see that cable loom at the bottom that vanishes under the seat back cushion? 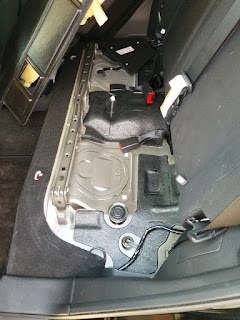 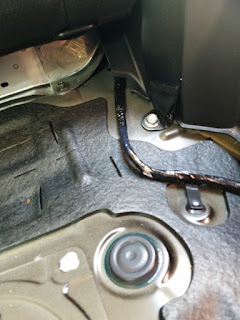 Back to the spare wheel well. Remove the wheel jack and tools from the bin they are in and you'll see a square hole. In the hole is another cable loom. Remove the 3 Philips head screws that hold the tool bin in place to reveal the whole loom. It goes to the rear light cluster. 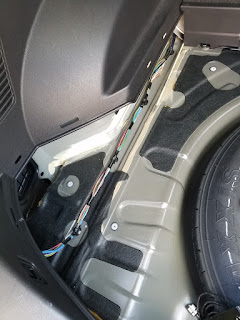 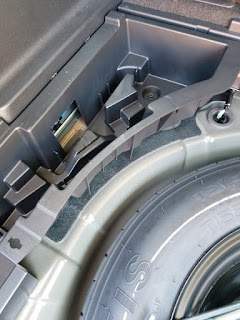 I inserted a cable fish into the gap that the cable loom used to get from the back seat to the trunk. I attached all my various wires (power, control, microphone, speaker and some spares) and pulled them all through from the trunk to the back seat. Carefully remove the plastic strip that's right at the door threshold to reveal another cable loom. The loom goes along the door sill, past the seat belt anchor and into the front. Remove the front door cover to expose more loom. I used the existing cable anchors to hold my new cables. 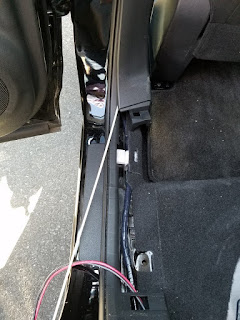 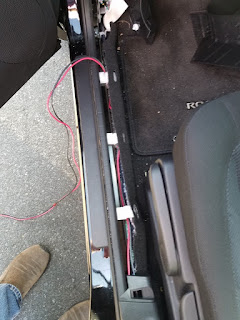 Having pulled all my cables from the back to the front I put the back seat and trunk back together again. The cables will be fed into the dashboard and installed into the control heads, microphones and speakers. Power also needs to be connected to the battery so a path through the firewall is required.

The usual way through a firewall is to find the vehicle's cable loom and piggy-back through the same hole. Good luck with that!! An inspection of the underside of the dashboard does not reveal any obvious candidates and neither does the engine bay. I was able to trace the engine hood release cable to the driver's side of the firewall but could not find it on the engine side. That's when I went back to the Nissan chat forum. Turns out that you have to remove the wheel and the fairing!!! 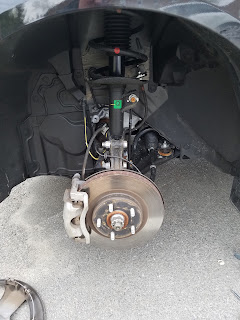 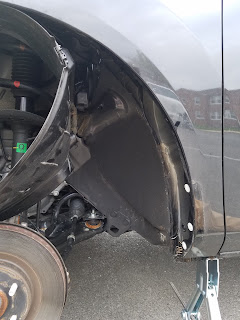 A closer look inside the wheel arch, behind the fairing reveals some useful grommets and even a spare one! Woohoo!! Where's my cable fish? 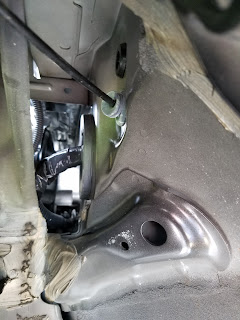 So now I had to find a tidy path from the cable tunnel along the door sill, up underneath the dashboard and out of the hole I found. Removing the plastic panel next to the door revealed a huge loom. I followed it and it led me to the hole I'm going to use.  Incidentally, the heavy duty red and blue wires in the picture are switched 12V and constant 12V from the car battery going to and from the ignition. You could tap in there if you wanted a switched source. Max current is 40 Amps as dictated by a fuse at the battery terminal. 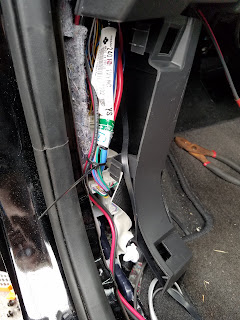 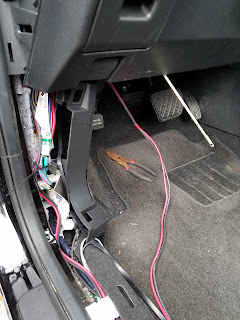 So with my cable fish (is it a fish or a snake? I have always heard it that you snake a cable with a fish?) inserted through my hole from the wheel arch side, I pulled the power cables through to the engine side. Then I found a path from the wheel to the engine and popped out right by the battery. 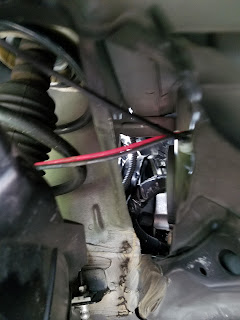 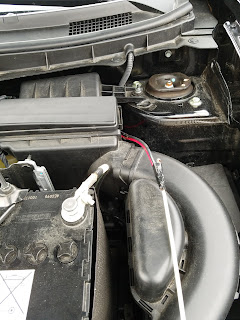 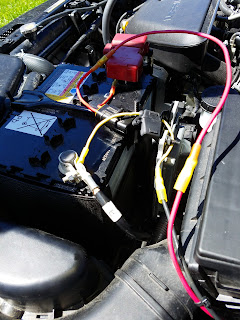