Funny things you see at Microcenter

So I was at my local Microcenter this lunchtime and I saw this on display. It might be a little "wishful thinking" But I get where they are going. 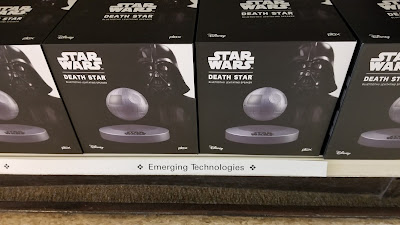 In a previous article I built a simple isolated audio interface to go between my radio and a PC for remote operation of the radio. This time I built an interface so that I could use the microphone from the radio on the remote PC 3 floors away.

I decided to use the mic from the HF rig as this would give the most accurate user experience. The user would simply pick up the microphone, press the PTT button and speak. The interface also has a USB to serial interface which allows the PTT to inform the computer that the user is in fact speaking. 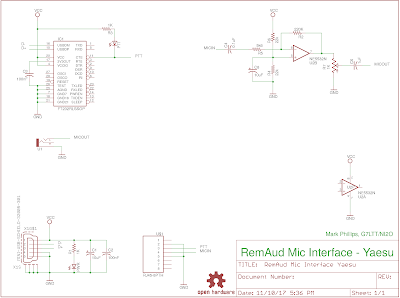 And of course I designed a PCB for it. You can get it at Oshpark 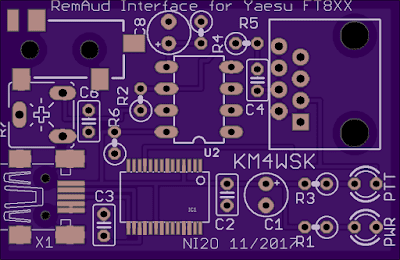 Simply connect normal sound and usb cables from this interface to your PC and then plug your Yaesu dynamic mic into the other side. Tell RemAud to use the CTS line of the new USB-serial interface.

I've added an audio buffer with a 300hz filter to clean up the mic a little. This might not be needed and so you can simply omit most of those parts and jumper across from the junction of C4 to C6 but do leave C6 installed as there is DC power coming from your PC to power an electret mic.

There are many cats that inhabit my house. None of them are mine. This one is Dee. She's a black and white Domestic Shorthaired cat and she has caught a mouse. It's still alive. If this was a video you'd see the mouse panting with fear. I caught this mouse and released it back outside. 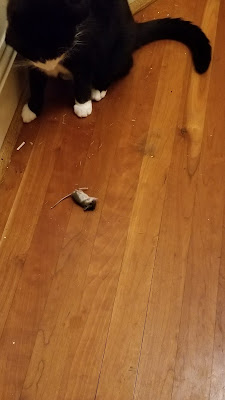 An hour or so later I was driving down my street returning from a shopping errand when I saw her again. This time she's got something much bigger. She's nabbed a squirrel. 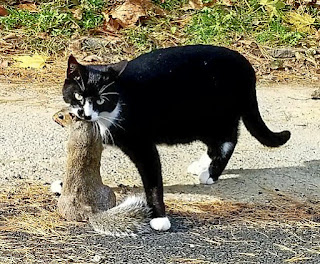 Turns out that this is not Dee but rather her neighbourhood doppleganger. We've taken to calling this cat "Double Dee". There you go Dee. That's how you hunt! Next time bring something home that we can all eat.
Posted by Mark/NI2O at 17:28 No comments:

I've been working towards getting my girlfriends HF rig remotely controlled. We have it installed in the sun room at the back of the house but her office is up in the attic on the 3rd floor.  This presents a problem as not only do we need to control the radio but we also need to hear what it receives and also send it some audio to transmit.

The radio control is easily achieved by using Ham Radio Deluxe and is very well documented elsewhere. For the audio portion I am using RemAud by DF3CB which is also very well documented on his website. What's not so well documented is the hardware that one might need be able to both receive and transmit audio from another location. It should be noted that whilst I am doing this from another room 3 floors away it could equally be done from 3000 miles away over the Internet.

If you are familiar with Skype then you'll know that it uses the sound system installed into your PC. The microphone is usually sourced from your webcam and the speakers let you hear the other person. RemAud is a similar application. It uses the same audio sources. And that's where the difficulty begins. Your HF rig cannot use the mic on your webcam.

Luckily this problem has been solved many times before. A simple radio-computer sound interface is all that's needed on the radio end. It needs to move audio from the PC to the radio and back. It also needs to key the PTT to enable the radio's transmitter. This is what I came up with. 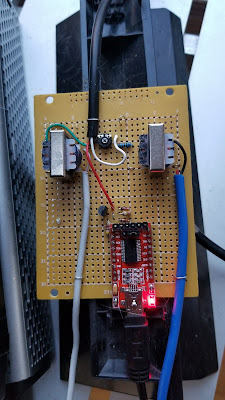 It's an isolated audio interface with USB based PTT keying. I made it from the junk box. The Audio part is a copy of the many transformer based sound card interfaces one can find on the 'net. The transformers isolate the electrical path between the radio and the computer in an effort to reduce computer noise getting into the radio. 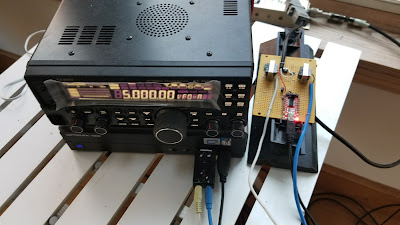 The USB part is a USB to serial interface that I had meant to use in an Arduino project but never got around to it. I added a small bit of circuitry to invert the signal from controller chip and also isolate the PTT from the computer.

I also added a USB sound card adapter to the PC to manage the sound instead of using its built in sound facilities. I'll be moving it all to the rear sockets of the PC and there are no sound outputs there.

It works very well. However, I am not happy with it. The PTT should really be isolated via a opto-isolator and it's larger than I'd like. So I set about designing another interface. This time it's more compact and has "proper" sockets etc. It's also fully isolated and can also key some CW too. 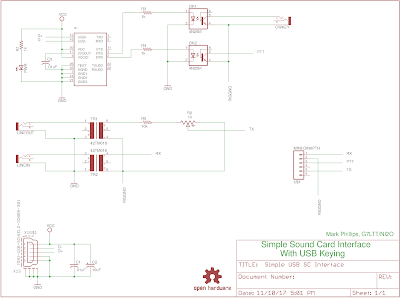 I designed a board for it too. You can get it at Oshpark 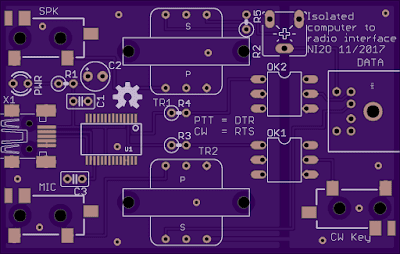 And here's the finished result. It works perfectly. It's also much smaller and now fully isolated. I used a PS/2 male-male extension cable that I got from Microcenter to connect the data port on the rig to the interface. At $8 it was not worth my time or effort to try soldering a cable myself. 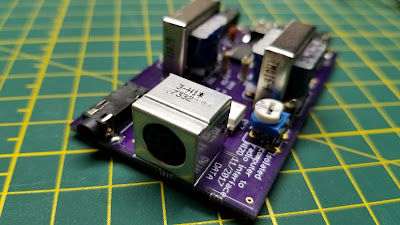 There was a caveat that took me a few days to work out. Direct from the factory the FT232 USB-serial chip has its signals inverted. This is correct as it actually converts from TTL to USB, expecting another chip to do level shifting up to the +/-12v that is RS232. But the chip makers have thought of that. They have a tool on their drivers website that allows you to change the signalling on any of the pins. I inverted DTR and RTS so that they would go high when applied thus powering the LED in the opto-isolator.

The Bill Of Materials is quite trivial;