Many hams buy sets of these military surplus 4' fiberglass poles for use as portable radio masts. They are lightweight, easy to deploy and store well in the back of the car. But there's a reason that they are surplussed out from the military; they are mostly split at the bottom.

Over time these splits will get larger and larger. Eventually the pole will fail under stress and the mast will collapse. This will most likely happen right when you are passing that vital piece of information to the Net Control station after that tornado tore through your neighborhood and you are the only station left on the air.

My set of poles suffers from this problem. So I have made some minor repairs to mitigate the inevitable loss. I have a bracket that holds the bottom of the mast. It's about 8 inches tall and so can well support the worst damaged pole. I always use the worst damaged one at the bottom.

Then using a hose clamp I secure the other poles such that they can no longer splay out. Do not tighten the clamp too tight as you'll misshape the pole. You simply want to add to the structural integrity. If the cracks are too bad you can drill a hole right at the top of the crack to prevent it from moving further up the pole. I stole this trick from the Liberty Bell 😁

Finally, assemble the poles in the usual manner.

In addition to the repairs I added an eye bolt to the very top pole so that I can attach an antenna wire to it.

Packet radio is pretty much all but dead here in the US but it seems not to be that way in France.

I recently saw a message on the AMPR mailing list about a 500kbps modem that someone in France had designed. The design files and software were put up on the Hackaday website. The design uses a handful of development boards cobbled together and has an Ethernet interface for the client computers to connect to.

So I decided to have a go at this project. I ordered some PCB's from JCPL and searched the usual online suppliers for all the other parts. It took about 6 weeks to get everything together but for about $65 per modem I was able to build 2 and test them across my workbench.

I've been playing with them for a few weeks and am very impressed with them. I can sustain my MMDVM hotspot across them as well as attach a WiFi access point and make a WiFi Calling cellphone call through it too.

The downside for us here in the US is the bandwidth and speed. The FCC says that we can only use a symbol rate of 56kbaud and a maximum bandwidth of 100KHz for data modes on the UHF 70 centimeter ham band (where these modems operate). Currently the modem software will only allow links of 200kbps in 270KHz and so do not conform to the rules.

Interestingly, this is not the only data mode to be found on the 70CMs band. Digital ATV has been around using the DVB-S standard for quite some time here. The ATV crowd erroneously reclassify their data (up to 2mbps!) as pictures/video rather than the data that it actually is. In this way they fool the FCC into allowing the mode without a rule change. So maybe that's how we do it for Packet Radio? Reclassify our data transfers as "image". After all, web pages have pictures in them. :)

Thanks to F4HDK for his design.

I've lusted after one of these clocks for quite some time now. But at almost $2000 I really cannot justify the cost. But it seems that the manufacturer has been listening to their customers and has produced a digital version for around $400 that you plug into a 4K TV which you also have to buy. Hmmm, I'm sure if I look hard enough I can do better than $400 and a TV set? 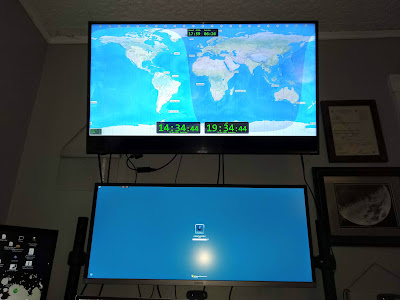 One can buy cheap 4K TV's these days for change of $200. The one above is a Hisense 43" with built in Roku that I got from Walmart in the January sale for $179. Below it is one of my work 37" wide screen monitors.

So basically the Geochron 4K clock is a bit of software running on an embedded device of some sort. I've not seen one up close but it looks like it might be some sort of AndroidTV Set Top Box? It's able to display the greyline, track satellites and do other things in that vein.

Looking around the Internet I found this piece of software by Simon Brown (of Ham Radio Deluxe fame). It displays a greyline graphic in real time onto your PC screen. It can also show you a handful of other details such as the Solar Indices and multiple clocks. The picture can also be changed for one of your choice.

In the junk pile I have an Intel Compute Stick. It's a 1.4GHz quad core PC that one shoves into the HDMI port of your monitor. It runs Windows 10 and has 2GB of RAM and 32GB of storage. It's also 4K capable. 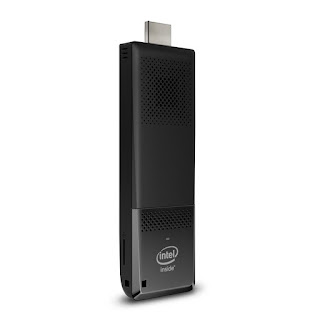 Within minutes I had it up and running and displaying the greyline clock. I have configured the Compute Stick to automatically run the software upon power-up and so if I want to watch the clock I simply turn on the TV.

The total cost for this project (assuming everything was bought new) is as follows: